In around 1971, soon after the Police Station, Magistrates Court, and The Close were built, children in the village had no area to kick a ball around, play on, or congregate safely. Indeed balls were being kicked around on School Lane. This was because the field where these activities had taken place for many years was now home to the houses and facilities previously mentioned.

A group of parents came together with a view to trying to get a playing field established in the village. After approaching the Parish Council of the day for help, and being told to go and get one yourselves, or words like that, a Committee was formed with that aim at the forefront.

The then-called Whitminster Playing Field Association organised fund-raising events, ranging from dances in the village hall, sponsored walks, skittles nights, jumble sales, a 200 club, and that sort of thing in order to get together funding to purchase a field somewhere in the village. About 3 years after starting to raise the funds, the field that is now the playing field, which was part of Kidnams Farm was identified.  An approach was then made to the owner of Kidnams Farm at that time. She was in favor of there being a playing field there, with several conditions relating to access, fencing, etc. More money was needed to realise this, so the scheme was delayed for longer than had been hoped.

Eventually, there was enough money in the bank to purchase the field and the access through the Rickyard, from School Lane. Cutting a long story short, the field was then handed over to The Parish, with the Parish Council, which by then had several new members, becoming Custodian Trustees of the Charity, which had been formed from the Playing Field Association.  This Charity later merged with the Village Hall Charity, on the advice of GRCC to become the Charity we know today of The Whitminster Village Hall & Playing Field Charity (Gloucester).  The new charity took over the management of the field with the exception of the grass cutting which the Parish Council agreed to keep on and pay for in perpetuity and give children from the village school use of the field in term time and drew up some village bylaws to prevent misuse of the field.  Contrary to many misconceptions the Charity or previous charities mentioned above had nothing to do with the then Parklands Children’s Home and their swimming pool which was situated almost next door to the Playing Field.

A cricket square was marked in the center of the field and a few Sunday games were played by village people, and Whitminster Football Club, which had been disbanded a few years earlier, asked to co

me back, using the area the far side of the cricket square as their pitch. These two instances met with the objectives of the Charity Constitution, which is still in place today. Whitminster Football Club had last played in a field behind Attwoolls Camping Centre, with players changing in the toilets areas of the village hall, walking down the A38 to get to the field, then walking back afterward and washing in a couple of zinc baths in the hall toilets, with water provided from the “copper” in the kitchen there. On the playing field, a mobile home was purchased to provide changing facilities; it soon became obvious that such facilities were totally inadequate. 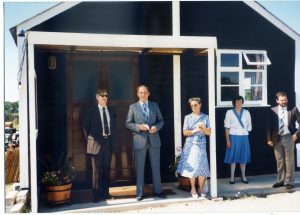 In 1985, or thereabouts, information came through that the SAS site in Hereford would be selling off huts that were being dismantled. After more fundraising and help from a benefactor in the village, a sectional hut was purchased from Hereford and delivered to the playing field. There was very little money available to rebuild it, and it laid in sections at the top of the drive for several months. Eventually, the then-new Manager of the Whitminster Football Club came to the Committee with a plan to rebuild the hut, in the position where it is now. Mains electricity, water, and sewerage connections had already been put in place on the driveway, and the sectional building gradually took shape, over a period of months, as funding allowed. The Whitminster Football Club Manager had connections in the building trade and was able to recycle many pieces of material that would otherwise have been scrapped. Eventually, in about 1987, the building was more or less completed and was opened one Saturday by Mrs. Kirkwood, who had been a strong supporter of the Playing Field and its aims all the way through. Unfortunately, the Whitminster Football Club Manager had been taken ill in the last few months and passed away before he could see his pavilion dream materialise.

The building has gone through quite a few changes in the interim period, rotting wood being one of the main contributors to changes having to be made. It is now in a position where ongoing repairs are proving to be unsustainable, and complete replacement is deemed to be the best and only way forward.

At some point during the early years of the Playing Field funds were raised for play equipment to be sited on the field.  There was a small wooden play area behind the school where the container is now on the playing field, and before the skate ramp days.  Consisting of frameworks made from telegraph poles, there were tyre swings, a climbing rope, a climbing net, and a horizontal ladder, for hand over hand swinging along.  Sadly, this was set alight by some who used it.  It was therefore deemed unsafe to use and had to be removed.

Later on around 2003-2005 came the Rock and Cross, Muga (Basket Ball Hoop), and Skateboard ramp at various different times funded by donations and grant funding.  And in 2015 a project was started with the help of a group of Mums known as the Whitminster Fun Bags to raise approximately £42,000 for more inclusive play equipment in a fenced, safe play area which was completed and opened in May 2017 and we continue to add to and improve the various equipment on the playing field in conjunction with the Parish Council as seen with their project to place a range of Outdoor Gym Equipment at the far end of the Playing Field.

There are no upcoming events.

This website uses cookies to improve your experience while you navigate through the website. Out of these, the cookies that are categorized as necessary are stored on your browser as they are essential for the working of basic functionalities of the website. We also use third-party cookies that help us analyze and understand how you use this website. These cookies will be stored in your browser only with your consent. You also have the option to opt-out of these cookies. But opting out of some of these cookies may affect your browsing experience.
Necessary Always Enabled
Necessary cookies are absolutely essential for the website to function properly. This category only includes cookies that ensures basic functionalities and security features of the website. These cookies do not store any personal information.
Non-necessary
Any cookies that may not be particularly necessary for the website to function and is used specifically to collect user personal data via analytics, ads, other embedded contents are termed as non-necessary cookies. It is mandatory to procure user consent prior to running these cookies on your website.
SAVE & ACCEPT